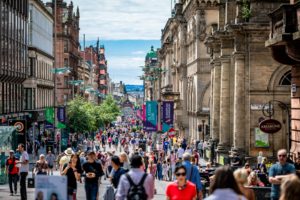 Future Health has today launched a major new report on the economic contribution of the healthcare sector to the UK. The research finds that with the right support from Government the sector could add 775,000 jobs in the next decade.

The report argues that the Covid-19 pandemic gives the Treasury the opportunity to change its approach to healthcare expenditure through adopting an ‘economics of health’ model. Instead of simply looking at health as a growing cost to the taxpayer through the NHS, lead author Richard Sloggett says it should be seen as a deliverer of high quality regional jobs, and a key part of the Government’s plans to become a global leader in life science and technological innovation, which in turn would act as a major driver of inward investment across the UK.

A national recruitment drive would be a critical first step in attracting people from all backgrounds to consider a local job in the health sector, which already accounts for 12% of all jobs in England. The campaign would seek to build awareness of the vast range of careers and opportunities in the sector from dentistry and physiotherapy to medical research and healthcare science.

As the population ages over the next 20 years, the report says local demand for healthcare services and products will increase markedly, creating significant employment opportunities. Analysis within the report looks at how demographic changes are expected to occur in the most left-behind places. It uses a ranking of how “left behind” a council area is based on combined measure of pay, employment, formal education and incapacity benefits, produced by the Institute for Fiscal Studies.

The report forms part of Future Health’s economics of health workstream and findings include:

The report argues that it should be a national priority to ensure that as the population ages, the UK meets its commitments to increase life expectancy levels and create a healthier and more productive society. It points to evidence from the Northern Health Science Alliance that reducing the number of working age people with limiting long-term health conditions by 10% would decrease rates of economic inactivity by 3% across the North of England and would reduce the employment gap between north and south.

To seize on these health and economic benefits, the report calls for a re-wiring of Whitehall approaches to the healthcare sector. It makes a number of recommendations including:

Richard Sloggett, author of the report, said, “With demand for healthcare services set to grow, fuelled by an ageing population and the repercussions of Covid, there is an opportunity for Government to embrace the sector as a driver of both national and regional ambitions for economic growth.

“Our research calculates that with the right support the sector could generate 775,000 new jobs by 2030, with strong growth in a range of places across the country including Birmingham, Manchester, Belfast, Bristol and Leicester.”

The press release is available here: Economics of health PN